Bailey to supporters in Bloomington: 'Nightmare on Elm Street is coming to a neighborhood near you'

“Who is ready to shock the nation when we fire JB Pritzker? Are you guys ready?”

Caulkins called Tuesday's election “the most consequential election in the history of Illinois in our modern times,” as he declared, “We cannot let Illinois become California!”

Halloween is over, but Bailey stuck with a related analogy as he focused on crime, taxes and education during the stop in Bloomington.

“The No. 1 job of government is to keep people safe,” the candidate told his cheering base.

“Strong armed robbers maraud along Elm Street and terrorize revelers and Gold Coast families that are afraid to walk their dogs.”

“JB and his criminal-coddling cohorts, Lori (Lightford) and Kim (Foxx), they own the chaos that is taking place in Chicago. But don’t look away, because the Nightmare on Elm Street is coming to a neighborhood near you if the SAFE-T Act goes into effect on Jan. 1," Bailey said.

WGLT asked Bailey for clarification about his understanding of the SAFE-T Act as he fielded a few reporter questions after his appearance. While Bailey conceded the law allows judges the discretion whether to release someone awaiting trial, he said judges' decisions have already been hampered.

When pressed about exactly how judges’ discretion has been held back, Bailey offered this: “It hinders it very much as to what the judges can determine and see necessary to hold someone. That is a fact.” His aide stepped in and said, “Next question.”

The state senator and farmer from Xenia described himself as “just a granddad with calloused hands,” ready to fight what he called “sophisticated wokeness” of the Democratic Party.

Democrats on Friday filed a complaint with the State Board of Elections, accusing the Bailey campaign of illegally coordinating with a political action committee that supports Bailey. The People Who Play by the Rules PAC, run by Dan Proft, has received $42 billion from an office supply billionaire, who has also directly given Bailey $12 million dollars, according to a Chicago Tribune report. By law, PACs cannot consult with or coordinate with political campaigns.

Proft is a GOP activist, former political radio commentator, and one-time candidate for governor. Bailey on Saturday refused to answer a question from a Chicago Tribune journalist who wrote a story about the complaint. However, a Pantagraph newspaper reporter questioned Bailey about the same issue.

“How do you respond to complaints by the Democratic party that the Play by the Rule PAC and your campaign illegally coordinated? Are these claims true?” the reporter asked. Bailey chuckled and responded, “Hope they’re not true. You know we can’t … I haven’t talked to any of those people since before the primary, so absolutely not.”

“We’ll put the P back into PTA.” Bailey ended the rally by calling his race with Pritzker “close but winnable,” and he urged supporters to make sure they vote and get others to vote for him.

Other Republican candidates running for elected office attended the rally including: state Rep. Dan Brady, who is running for secretary of state; Desi Anderson, candidate in the 46th State Senate District; Scott Preston, candidate in the new 91st State House District; and state Sen. Sally Turner who is running to be re-elected. She replaced Bill Brady of Bloomington, who resigned from his 44th State District seat unexpectedly in early 2021. State GOP Party Chair Don Tracy was also on hand.

After a roughly 20-minute address, Bailey worked the room, signing autographs and taking photos. Catherine Cannon, who described herself as an evangelical Christian, had him sign a book with the title “The Faith of Ronald Reagan.”

Dan Atwood, a truck driver from Godley, thinks Bailey as governor will be able to lower taxes and the price of gasoline.

“I’m hoping he does something with the taxes first. COVID’s also a big deal. There’s no reason anymore to be having COVID lockdowns like that. Everybody knows, hey it's a risk we’re going to have to live with for a long time.”

Atwood is also concerned about crime. He shared that he recently read a newspaper story about a guy with six driving under the influence convictions who was on the road. When asked whether Illinois needs more prisons Atwood responded, “Actually yeah, they keep closing the prisons.”

After the Bloomington rally, Bailey was off to campaign in Moline and Rockford as he makes the most of his final days before Tuesday’s election. 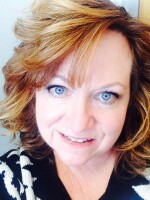 Colleen Reynolds
Colleen has spent most of her adult life working the streets and beats of Bloomington-Normal for WJBC-AM where she won numerous reporting awards for hard news, feature writing, and breaking news coverage.
See stories by Colleen Reynolds